Ebsford are an environmental company based in Yorkshire that specialises in aquatic restoration, that is restoring the natural flow of rivers, streams, waterways and lakes.

We have worked with Ebsford on various projects, but the first was a number of years ago when they were removing silt from the lake of Fountains Abbey in North Yorkshire.

This was an exciting project for us to be involved in because, at the time, we’d never seen anything like this before, never seen the machinery they were using before.

The silt removal machine looked like a floating bulldozer, and moved like one on the water, with a excavator attached to the front to scoop up the unwanted silt. The machine also acted like the largest vacuum cleaner you’d ever seen, with a thick tube sucking up the silt and transporting it over a kilometre away, where it was deposited into a field within some cunningly designed holding cells made from hay bales.

Once all the silt was removed, the hay bales were mixed with the muddy silt to create a nutrient-rich mixture that was used by local farmers to fertilise their fields and crops.

Our main task was to use our drones to film the whole process and show the huge scale of the operation, to show how this floating bulldozer was removing silt from a massive lake and depositing it in a field over a kilometre away without affecting the beauty of the grounds of Fountains Abbey.

An additional bonus was that we were able to fly our drones over such picturesque scenery and, escorted by the grounds keeper, get some great shots of the abbey itself for use by the estate and the Nation Trust.

Ebsford were involved in clearing the river and waterways of Guisborough, near Redcar in the north east of England. For this we used our drones to capture footage of the river outside the town, excavators removing unwanted weeds and outcroppings to free up the waterway, and a new engineering project they were working on to alleviate flooding in the future.

One of the areas that Ebsford have become increasingly involved with over the years is the removal of the rapidly spreading and destructive Japanese Knotweed. One notable case we were involved with was a large area where the Knotweed was totally out of control. It was so thick and high you couldn’t have walked more than a metre into it, and it covered about one square kilometre! It needed to be completely removed as there was to be a new housing estate built on the site. If any traces of this virulent plant was left, it could grow again later and cause a lot of damage to the new houses.

Well, as one might imagine, there was some awesome machinery involved in cutting, shredding and removing the Japanese Knotweed, and we got to use our drones on this site near Darlington to record these metal monsters eating the unwanted plants as the work began, then we went back with our drones a few weeks later to record the same area and show the progress that had been made. The results were quite miraculous actually. What started out as a nightmare jungle of impassable knotweed, was transformed into nothing but a large area of fertile soil with a large machine in the middle separating out the soil from large rocks. The whole site had been excavated to several metres below ground level to insure all the roots of the Knotweed were removed.

Progress reports, and before and after filming, make up a large proportion of our work with drones and are some of the most exciting to us as they always involve filming dramatic changes! 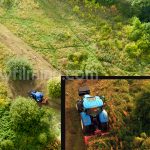 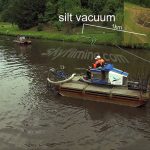 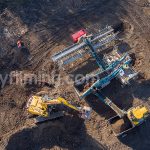