Sky Filming spent the day at a British Petroleum gas plant near Hull to gather drone aerial video clips for a commercial production.

In this case Sky Filming’s drones were used in conjunction with a video production company called VIP to create a promotional video for British Petroleum’s gas plant at Salt End in Hull.

The video was used to show other large petro-chemical-related industries in Australia and around the world how BP operates its plant in Hull in the UK, and to promote investment in BP.

Being a gas plant there were a lot of safety concerns so we spent a few months in planning our visit, discussing the exact locations to fly from to mitigate risk as well as learning site specific safety regulations and emergency protocols.

Like many of our case studies, it was a privilege to see inside and fly our drone around this awesome industrial complex and be part of an international video campaign.

The work involved using our drone to film gas pipelines, a cooling tower from ground level to directly above and the entire gas plant with the River Humber tanker dock. 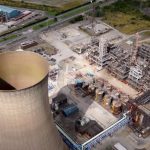