This week has been pretty exciting for us as it was time for Britcom Trucks LTD to release the video we’d produced for them. Britcom is a company that buys fleets of used trucks, reconditions them, and sometimes re-purposes them, so they are like new then ships them all over the world, to Africa, Europe and the UK. We were existed to undertake this video production project because, one, it was not far from York in Market Weighton so it was nice to work with a local company, and two, it’s big trucks and what’s not to like about that?
The brief for this project was to produce a video, using our drones for aerial shots and our film camera for indoor and on the ground shots, that shows the size and scope of their facility. They were particularly interested in showing their clients, and potential clients, the size of their yard with its vast collection of trucks available, as well as trailers and plant equipment. This was the primary objective, but they also wanted to show they do everything on site, from start to finish – i.e. the trucks come in, they have their body work repaired, engines re-tuned, paintwork renewed and are even steam valeted before being shipped off to the port of Hull and onward to their destination.
Our 4K camera drones did a great job of capturing the overhead shots of the trucks, flying low over the top of the many lines of trucks as well at getting some high altitude shots of the entire Britcom site. It was also very interesting to get inside their workshops with our 4K movie camera to show what goes on in the various buildings.
It was a bit of a challenge flying and filming outside with it being Winter and with bits of snow here and there, but the management were eager to have a video produced now rather than wait until Spring or Summer as, by which time, many opportunities to show the video, at trade shows and international meetings, will have already passed.
They have had a lot of positive feedback from the video already, and they are very pleased with the video we produced: 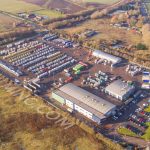 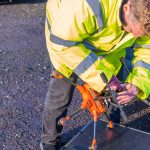 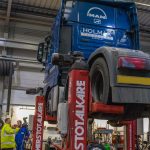 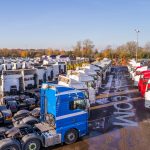