Sky Filming worked in conjunction with a Belgian and German company and created a 3D model of the Heineken Brewery in Tadcaster, North Yorkshire.

This was a very interesting project that started with a phone call from a company in Belgium that wanted us to use our drone to take GPS tagged images of the Heineken brewery in Tadcaster, not far from York where we are based, and create a 3D computer model.

After an intense day at the brewery, using our drone to take 512 geotagged images of the two buildings, the photos were run through some very sophisticated software called Accute 3D to create an accurate, measurable computer model of the site. After this the model was then passed onto a German solar panel company who used our drone model to measure and manufacture solar panels for the Heineken brewery without having to leave Germany until they came and fitted them on the roofs.

3D Computer modelling using drones is revolutionising all areas of construction, surveying and archeology. For us, in this case, it’s always nice to drive by the brewery on the A64 and see the solar panels on the roof, knowing we had a hand in installing them with our drone. 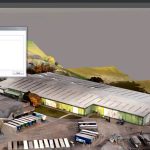