Treves UK Ltd have a factory in a beautiful location by a lake between Ripon and Knaresborough in North Yorkshire.

They had an aerial photograph taken of their site a few years ago from a tradition manned aircraft, i.e. old school style.

The old plane aerial photograph was not very clear, which is often the case as they are usually taken by a pilot or passenger in a Cessna or Piper pointing an ordinary camera with a zoom lens out of the window. Tradition general aviation has to fly above 500 feet at least, so they have to use a zoom lens to get shots like these, like those ones they sometimes bring around to your house after they’ve snapped the entire neighborhood.

Besides wanting something clearer and sharper, the factory had also been expanded since their last aerial photograph that hung in their lobby was taken, so they wanted an updated version in more ways than one.

For this small project we first had a chat with a Treves representative and had a look at their previous aerial photograph for reference so we could emulate that shot as well as collect 20 or 30 variations from different sides of the factory and including the surrounding countryside.

With our drone aerial photographs they were able to choose an updated copy, get it printed in a large format to hang in their lobby, and use the rest for future reference, social media, printed brochures and posters etc. 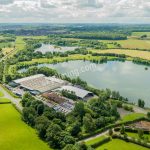 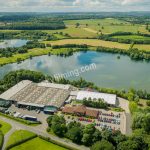 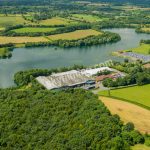