This month we have seen a new environment for us, working at various open cast coal mines around Yorkshire and Nottinghamshire, with a couple more in the pipeline.
In this instance were were working with a photographer, Jodie Leanne, who has an exciting gig working as a photography and video maker for a company that owns various coal facilities around the UK, some of which are still actively mining coal and some are being cleared, cleaned up and having trees planted to be converted into housing projects.
Our drones were used to gather some aerial images of the coal mining sites to help with these developments, and to capture super smooth 4K aerial video of the coal mine operations to be included as part of the combined video about all of the companies collieries.
We have worked at salt mines in the past, way back in 2012, but this is our first opportunity to survey coal mines and coal extraction operations with our drone. It’s a very different landscape. It’s probably said by lots of people, but up close, on the ground, it really does feel like being on the surface of the Moon. Everything is blacks and greys, monochrome, except for the occasional bright yellow quarry truck or orange digger, which make interesting photographs in themselves but look amazing set against the lunar-like appearance of surface mining facilities. 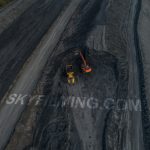 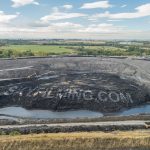 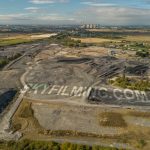 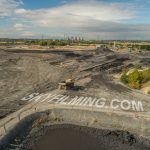