Dawson Wam, the Belfast based UK-wide piling construction company, are installing foundation piling for Glasgow’s subway train system’s new control centre near the railway terminus sheds in the Govan district of Scotland’s busiest city.
We were there with our drones and 360 cameras to collect aerial images and drone video clips of the very start of this new building’s construction.

The underground rail subway system is unique as the carriages are slightly smaller scale than usual and the route is circular with only two direction, clockwise and anti-clockwise, with both directions going to all the same station. We got to ride on these unique orange trains, which was quite exciting as a bit of a train nerd.

The drone survey and engineering photography of Glasgow’s Subway rail control centre works was interesting as we normally have to fly drones away from railway lines, which are above ground at this location and next to the piling works. However, liaising with Glasgow Subway they were happy so long as we didn’t fly over the tracks. It isn’t a busy location actually, just the terminus where the trains are kept when the subway closes, so we only actually saw two trains the whole time were were there.

To get some close shots, right by the track, we used our special camera pole as well as a 360 camera to get elevated shots without using a drone.

With these kinds of technical engineering jobs our 10 years experience plus higher insurance levels than most drone operators and video producers is a must, and being able to use the latest technology alternatives where drones can’t be used to achieve the same results is also a massive bonus for many industrial projects.

Being as it was our first time in Glasgow for drone aerial photography, we took the opportunity to get a couple of shots of the Govan district and river Clyde with Glasgow Tower in the distance and the city itself beyond that. We also got to spend some time in Glasgow city centre to watch a cycle race and visit Glasgow Gallery of Modern Art. It’s a great vibrant Scottish city and we can’t wait to get back there again! 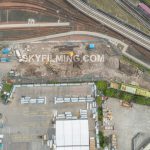 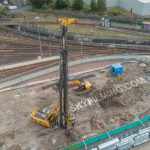 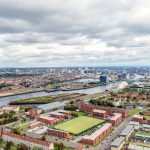