This was a nice job for us because some of the drone filming for this project took place in York, where we are based.

Last year the BBC Documentary department were creating a 3 part drama-documentary series about England in 1066, a pivotal year in English history, called “1066: A Year to Conquer England”, with Dan Snow presenting and narrating.

1066 was the year the French Duke William II of Normandy successfully invaded and conquered England.

This year also pretty much marked the end of the Viking era in England, with the Battle of Stamford Bridge and the Battle of Fulford taking place between the Norwegian Viking king Harald Hardrada and the English king Harold Godwinson. The Vikings were victorious at Fulford, near York, but were soon after defeated at Stamford Bridge.

Duke William II invaded England near Hastings on the south coast soon after king Harold’s victory up north, forcing his army to march 300 miles or so south to fight the invading force.

Our drones were used to capture aerial video footage of York, as well as various pieces of battleground scenery.

We filmed our drone footage in August 2016, but we’ve had to wait until now in April 2017 for it to be aired to see our clips on TV. Obviously this isn’t the first time we’ve had our drone videos used on TV, in fact it’s not even the first time we’ve worked with Dan Snow, but this was more special for us because it involved not only our home town, but the area where I grew up – Fulford!

You can see information about the documentary drama here: 1066: A Year to Conquer England 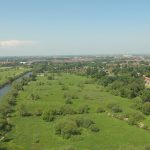