A lot of our work involved flying drones indoors, inside factories and warehouses for corporate videos and internal build progress reports.

Roof inspections are usually conducted outside, using drone cameras to zoom in on tiles, slate roofs, aluminum roofing, guttering and other rooftop features.

However, on this occasion we were asked to use a drone to inspect the inside of a new roof and check that all the places where the roof joins the internal frame of the building has all the required bolts attached, that none of them were missing.

This was a new build factory in Gateshead near Newcastle and an engineering report had to be made to ensure there were no nuts and bolts missing from the internal roofing, particularly on vertical plates that connected the roof to the large girders that formed the main skeleton of the building.

This was quite a tricky task as the plates with their 4 bolts (see images below) are very close to the ceiling, inches away in fact, and there were lots of complex obstacles, racking and pipework to fly around to get a view of the bolted plates which were placed every few metres along the girders, of which there were 22 in all.

We used a specially adapted drone for internal roof inspections that could navigate complex interiors, which meant the drone had to be small with a cage around it so it could go right up, and even touch the ceiling of the factory to see each bolted plate and get a photograph that confirmed all 4 nuts and bolts were in place. Capturing drone images from both sides of each roof plate was necessary before moving onto the next one along that row, then moving onto the next row.

It was slow yet methodical drone work, but it meant the engineers were able to show that no nuts or bolts were missing from these vital roof connections. 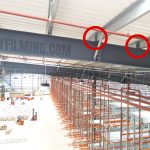 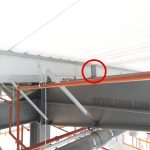