About a year ago we got a call from a guy in New Zealand asking if we could pop over to Elvington Airfield, about 20 minutes away from our offices, to drone film a fully autonomous electric racing car practicing an attempt on the world speed record for driverless cars, so obviously we did!

We have filmed numerous events, including speed tests, at Elvington Airfield, but this is one of the most interesting to us as the rise in drone technology and self driving vehicles technology has experiences a lot of cross over innovations, and robotoics and AI are very much a passion of ours so this was an awesome opportunity to get involved in a small way with this incredible machine for just one day.

The day started early at sunrise and finished at sunset to maximize the time available. The most difficult part of the job from our perspective was just keeping up with the car, which actually turned out to be completelty impossible as it was reaching speeds up to 300 kph!

Because of the speed of the car, our shots could only include the start, drive-by/under shots and general setting up of the car shots as well as filming the car driving slowly on its return to the engineering truck.

The car itself looks very much like an F1 racing car, only without the cockpit for the driver, and is pretty much the same size. The car isn’t a remote control vehicle, though it can be when needed, but a fully autonomous, environment aware machine. The car knows the dimensions of the track its racing on and collects LiDar and other complicated information about its surrounds as it races along at 300 kph.

The goal of this day was to test the upper speed limits of the Roborace car, and has since gone on to create a new world record. The ultimate goal is to develop a new sport in AI Racing Cars, self driving electric cars competing on full size race curcuits around the world, with a focus on engineering and technology instead of drivers.

You can see the video we helped create here, and checkout their youtube channel to follow the full story (spolier alert: it’s amazing) 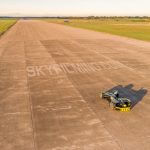 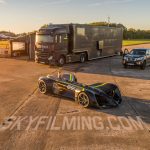 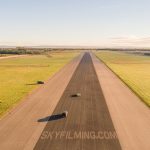