2020 certainly was a strange year for filming, with no events or TV work, but we did manage to close the year working on a cool music video in some woods in North Yorkshire.

As is often the case, we were working side by side with another video production company, also based in York, called VIDAVEO and helped them make a music video for a Knaresborough-based group called The Paul Mirfin Band.

As has been the case throughout much of 2020, social distancing was a big feature of this shoot, which was nearly all outdoors, and became a focal point of the video with individual musicians playing isolated within the trees, and finally in a clearing with spectators gathering (all part of the shoot) while keeping a few metres apart if not in a couple.

It was a nice highlight to finish off a most unusual year, seeing and hearing this wonderful music and getting some awesome drone shots for their video in such a great outdoor location in Yorkshire.

Here are some behind the scenes stills from the filming: 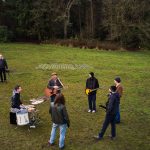