Sky Filming has captured video footage and photography for numerous news services and news wire companies, both for features and live news as it happens.

One particular news item that stands out, both because it was in our home town and because it spanned a whole week, was our coverage of the York flood disaster in late 2015 early 2016.

York’s River Ouse floods regularly, usually two or three times a year, but the city hit the news this time around because the local authorities made a mistake with the flood barrier on York’s second river, the Foss.

The River Foss runs through the town centre and used to flood a lot before a barrier was built in the 1980s near the end of the river where it joins the larger River Ouse.

The barrier was put in place to stop large volumes of flood water from the Ouse entering the Foss and flooding the town centre. However, on this particular time, there were concerns that the flood barrier might be malfunctioning so, for whatever reason, the council decided to lock the barrier open in fear that it might be locked shut if it broke down.

Obviously, in hind sight and considering the damage it caused, being locked shut instead of open would have been far more preferable.

Chaos ensued. It was all over the news, TV and papers. The army were brought in with military grade sand bags, and the Prime Minister visited to, erm, do whatever prime Ministers do in these situations.

It was all too late, of course. Hundreds of homes were flooded and abandoned, and many businesses were closed or destroyed completely.

It was a very hectic time for us as we found ourselves exploring one disaster scene after another, capturing aerial drone footage of the flooding while also helping a few stranded people get from A to B.

To make matters a little more difficult, the local telephone exchange had been flooded and totally wiped out, so no one in York had an internet connection. This was a problem for us because we had to send our video clips to the news desk ASAP, which in this case meant we had to drive to Selby to a friend’s house and use their broadband connection to upload our clips for Sky News. These are 4K and 1080P full HD video clips, so we needed a pretty fast connection, and even then it took us over an hour per batch of clips, before we drove back to York to liaise with reporters and production managers to capture more clips.

It was a week of mixed emotions for us. Sad about the damage to people’s lives and property, while simultaneously excited and fuelled by adrenaline, racing around everywhere then watching our clips on the news all day and night for a week! 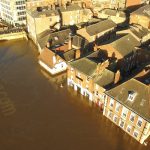 Here are some drone aerial video clips of the floods that were not seen on TV:

And here is one of the many Sky News pages from that week, with video showing our aerial drone clips of the flooding in York: