We’ve always wanted to film at the YSP, and the opportunity arose in February 2016 when they asked us to come and use our drones to film an event, some VIP visitors coming to see an open air exhibition of large sculptures by American artist KAWS. The sculptures are very large, some up to10 metres tall, and feature Pinocchio, Mickey Mouse and children’s clowns, so a drone was the perfect device for filming them.

However, England being England, it was pouring down with rain on the day and we couldn’t reschedule because the VIP visitors were coming at a specific time on that day.

Grey skies and heavy rain don’t really make for a pleasant aerial video, or any kind of video for that matter, but we had to try our best and get on with it. We had umbrellas covering the drones on the ground while we waited for the guests to arrive, then we had to fly the drones for just a minute or so until the lens was completely fogged up and covered in water, then land and clean the lens and go straight back up again.

It was a horrible job really, with the sculptures barely visible in the rain and the ground a sea of umbrellas protecting the guests, not to mention struggling to keep ourselves and our equipment dry at the same time.

Still, we got the drone footage, recorded the event for better or worse.

That’s always the danger with events though, you have to go with what you get in terms of weather. This is definitely one of the worst drone jobs we’ve been on for weather though, and we’ve been doing this since 2010! In fact, the only event worse than this was when we got rained and literally blown off the mountain with Dan Snow at the top of Helvellyn in the Lake District in 2012. 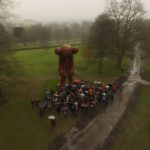